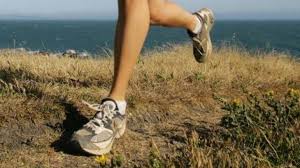 The narrator in Richard’s piece associates the ocean with quite different memories, and we sense a political context here.

The heat is worse than usual, and the flies are relentless in their search for moisture, swarming at my eyes and nose and mouth.

This track I have chosen goes through the stink of the piles of garbage that have built up over the years, so the flies are inevitable. But that, I hope, makes the path a safe one, and I trudge on, drawn by a distant susurration.

I hear voices ahead – loud, arguing voices – and I slip off the track and crouch in the bushes.  The beer-fuelled argument stutters along the track towards the camp from which I have come, and I am thankful they have found something to argue about.  I glimpse a bottle being waved about, and can see that at least two of the four men have bush knives strapped to their waists.

When they are gone, I resume my trek towards that soft sound. It grows louder as I creep through the last trees and out onto the gritty beach.  There is no one in sight, so I can walk to the edge of the beach and let the tepid salt water surge around my ankles.  While sea-birds wheel and dive beyond the reef, as I stand, searching the blue expanse.

The Ocean helps me remember where I came from, and where I hoped to go, before they put me on this island, in that camp.