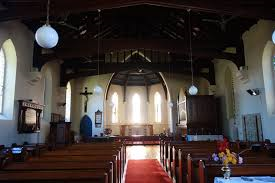 Richard’s take on writing about an unfamiliar subject is called

In Another Man’s Shoes

Edward hurried along the uneven paving stones towards the arched wooden door. He could see Mrs Tompkins and Miss Bray waiting where the morning sum warmed the angle between the stone wall and its flying buttress.

Edward fossicked in his trouser pocket for his key ring, and had to snatch to stop his robes from sliding off his other arm. He didn’t need the ostentatiously neutral looks the two women hurled at him to know that he was late.

“Morning ladies; lovely morning, isn’t it? Too nice to be inside”

He regretted saying it before the last syllable had passed his lips. Mrs Tompkins’s eyes narrowed.  The corners of Miss Bray’s mouth turned downwards.

“Good Morning Father” was all the reply he got as he fumbled at the lock. The key went home and he turned it.  The old wooden door seemed stiffer on its hinges than ever.

A bump from his shoulder set it moving. He stood, feeling his ears burn, as two bundles of flowers were carried past him.  Both women had their noses ever so slightly in the air and Miss Bray’s eyes had swept across him, lingering briefly on the shirt he knew was not tucked in properly, and the too loosely knotted tie.

He slipped into the vestry as the two old ladies began placing the flowers. They were silent at the altar, but by the time they reached the middle pews, low murmurings were drifting back to him.

Father Jenkins had owned this church for almost four decades, and was now buried in the adjacent graveyard. Edward felt certain that more than a few of his dour, aging congregation would happily sign up if the Devil offered to swap the old priest for the new.

By rights, he should have had a few years as an assistant curate to an experienced minister at some larger church. He was finding out the hard way that Honours in Divinities and Theology did little to prepare a young priest for pastoral work.

“Hallooo?” The round tones of Eric the organist echoed through a space meant for hundreds.  Edward wondered if there would even be dozens to hear Eric’s heavy handed renditions of the ancient hymns and psalms.

Not so ancient, Edward supposed, to someone as grey and antique as Eric. He gave himself a mental rap over the knuckles.  How could he entertain such thoughts when he was about to present a sermon charity?  And Eric at least brought a few extra bums on pews, a couple of them quite shapely – how did that man produce such pretty daughters?  Edward ordered himself to take a longer penance after the service was over, and waited for the organist to shuffle through his papers.

Which raised another question, would Eric have managed to pick the right music for this week’s readings and lessons, or would he be a month out, again? And, would asking to preview the music selection result in another dose of last night’s whisky fumes?  Edward wondered how he would tell the difference between the whisky fumes of last night, and this morning, if such were to be the case.